Last night, we participated in an all night prayer meeting at our church. The Lord had impressed on our Pastor’s wife, Carla Shipp, that our church needed this time to pray. We have many members who are dealing with significant afflictions and we are desperate, as so many of you are, for God’s presence and direction. We had times of worship, times of corporate prayer and times of personal prayer.

It was really a wonderful night. We stayed from 7:30 pm – 3:00 am. I was so excited to see that Clay made it that long! I would offer to take him home so he could rest, and then someone else would come pray with him and he would get encouraged to stay a while longer. That happened several times. Finally, at 3, I could tell he was getting pretty exhausted, so we came home.

At one point, everyone came to pray for Clay. He was sitting on the step at our altar, just like you see him sitting there with Ben in the picture above. Everyone came around us and cried out to God on our behalf. It always amazes me to listen to the prayers of the people in our lives. I know God heard the cries. When the prayer came to a quiet moment, Clay started talking. (I love when he does that!)

He has said the same thing probably 100 times since he’s been sick, but I never get tired of hearing it. As he was speaking, I looked around and people are just so focused on what he’s saying. There is something VERY powerful about listening to a man who is dying. His words are powerful. He just thanked everyone for their prayers and then he made sure they knew that he is ok.  He often says, “To live is Christ, to die is gain.” He believes it. It is very real to him right now. The truths he has known all his life have moved from his head to his heart and he has learned a new reality of Christ as he faces death.

“It’s Jesus, y’all. I’m telling you, it’s all about Jesus! You’ll never regret serving Him. He’ll never fail you. His peace is so real.”

I think the most convicting thing about his faith, is that he is not clinging to this world. Now, if you know Clay, you know that he LOVES some things in this world with a big love. He has always loved sports, movies, music, people, coaching baseball, friends, family, and me. He really loves me. But, as soon as he accepted that this disease could take his life, he willingly laid it down for the will of God and he never looked back. He has never said to me that he is going to miss the world. He’s not asking God if he can watch the Dodgers from heaven.

He worries about me and the kids, his parents, my parents. He wants us to be taken care of and loved, but he isn’t clinging to this world. He means it when he says that he is excited to go to heaven. Don’t mistake this for giving up. He has never given up. He has done everything the doctors have suggested and he has lived life for 15 months. He is vibrant and he looks so healthy. He is not giving up…he is just content to accept whatever the will of God is. It is very inspiring and simply amazing to see.

I challenge you to really ponder your own faith. Do you trust God this much? Is Jesus this real to you? If not, He can be. You can know Him in this personal way. Come visit Clay and he’ll tell you all about it!

We have had some really good visits the past few days. I love to see how Clay perks up when people come see him. This is Steve and Penny Loving. We met them through Facebook and mutual friends just after Clay was diagnosed. Statistics say that only 2-3 in every 100,000 people get Glioblastoma, but it seems like it is much higher than that. We’ve met so many people who have it, or have lost loved ones to this disease. Steve was diagnosed with Glioblastoma in March of 2016, and Clay was diagnosed in May. They have shared many resources with us and Penny and I have become friends.

This is Dan Dix. He was Clay’s pastor when he was in college. Clay talks so often about people in his life. God used many people to shape him and help in his relationship with the Lord. Dan was one of those people. We visited for a while and we talked about the goodness of God.

I have some wonderful friends in my life. This morning, Christy (Chenevert) Mac came to see me. We grew up together, and although we don’t see each other often, she has blessed me many times during the past year. She came to share some things the Lord showed her for me. There were two specific prayers that I was praying at the prayer meeting last night. I was asking the Lord to show me what He desired in two very specific decisions I need to make. The Lord confirmed His answer to me for both questions this morning while she shared her heart with me.

He hears our prayers, y’all. He is listening. And, He loves us and wants us to have his guidance in our lives. Thank you, Christy. I’ll never forget our sweet conversation. God really used you today. I love the sign in the background, and the words are so fitting. His grace abounded to me today.

The Mullins’ visited today! Clay always says he had 2 sets of sisters. On his mom’s side of the family was Kellie, Emily and Amy Mullins. On his dad’s side of the family was Joanna, Jessica and Jennifer Janet. He has two brothers, so it’s kind of cool to think of how they all had each other growing up. He is so loved by his family. I love to watch them just look at him while he talks and I love to listen as they tell him how special he is. He tries to shrug off the comments, like he’s not anything special, but I think it is so evident by the outpouring of love over him while he’s been sick. He is so loved. He is a unique person. 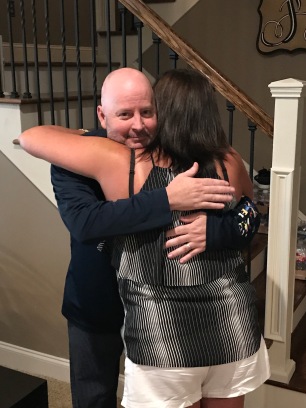 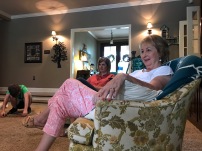 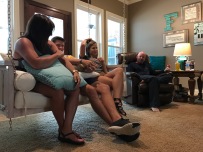 A few weeks ago, Clay and Sam found Clay’s old Atari in his mom’s attic. Caleb took it home and cleaned it and got it working. He brought it back today and we all played Space Invaders and Donkey Kong. Clay kept telling me to give Caleb $1000 because he fixed it. Um…..I didn’t do that. But, we did tell Caleb how great he is several times.

Many of you have asked me how he’s doing physically. I give thanks everyday for his strength and the life that is still in him. You can see it in the smile on his face in these pictures.

His biggest struggle is fatigue. He sleeps a lot and he’s tired most of the time….unless he’s visiting with people or at the all night prayer meeting! Most days, he sleeps until noon and then naps in the afternoon. He sleeps very well at night.

He has occasional headaches, which seem to be coming a little more frequently lately. But, they usually only last a few minutes and they are not too painful.

His short term memory is terrible. But, he knows it and he laughs about it a lot. Every now and then he’ll get a little frustrated because he can’t remember something, but most of the time we just laugh. He asks the same questions over and over again, and he gets easily confused. I find that topics that cause deep emotion are harder for him to remember. It took him over a week to remember the diagnosis from MD Anderson, and he still asks me for clarification on it sometimes. Every time I remind him, he first asks if I have told the kids. Then, if I’ve told his parents, and he wants to know how they responded. He’s always thinking about everyone else.

His eyesight is still really bad. It is worst when he’s tired. He can’t read very much and he doesn’t see things at a distance very well. But, he’s been to a few baseball games and found a way to enjoy himself. He watches TV with us sometimes, but he’s never really “into it.” He just enjoys being with us.

We have so much to be thankful for. He is able to do most things for himself. I have to remind him to do things, but as long as I guide him, he can do things for himself. He doesn’t have pain. He hasn’t been nauseated and sick. He doesn’t have difficulty with his speech. He hasn’t lost a bunch of weight. He can walk, and talk, and eat, and do almost everything that we do. Every time I’m tempted to be sad about his side effects, I just remember how blessed we are.

It’s hard for me to type these words, but we are meeting with Hospice on Monday. It is an introductory meeting, and we know that it doesn’t necessarily mean the end is here. It really just means that we aren’t going to be receiving treatment from his doctors any longer. They will help us manage his symptoms and any pain, and they will help us prepare for what is ahead. God has comforted me greatly during these past few days. His peace has covered us and I know that He is directing our footsteps.

I believe that God can heal Clay at any time. We all do. Our faith is strong. And, the Bible says that all we need is the faith of a mustard seed, if we are believing God for something He desires to do. (Christy reminded me of that this morning.) We have the faith of a mustard seed. I’m sure of it. So, we will continue to pray and believe God. He is able to do far beyond what we ask or think.

God is still using Clay and working through him. He’s not finished, yet. Stay tuned because I fully believe there is much more the Lord desires to accomplish. Much love!

14 thoughts on “To Live is Christ…To Die is Gain”