Everyone met at The Bluff’s in St. Francisville, and the day was a true celebration of Clay. He was surrounded by old friends, new friends, family, and strangers, who all came to support our family and support Clay in his fight with cancer.

When Clay’s brother, Ron, thought of the idea and started telling us what he wanted to do, I have to admit that I didn’t expect anything huge. I was thankful that he wanted to do it, and I knew Clay would have fun, but I underestimated how great it would be. So, I spent the entire day overwhelmed with emotion because of the outpouring of love. It was a HUGE success! Ron did a wonderful job planning and preparing everything, and 18 teams of golfers showed up!

Look at all these faces…

Several of us met there Thursday night and stayed in the Inn on the property. We had dinner on the patio at The Francis, which was delicious. The weather was perfect! The company was superb. 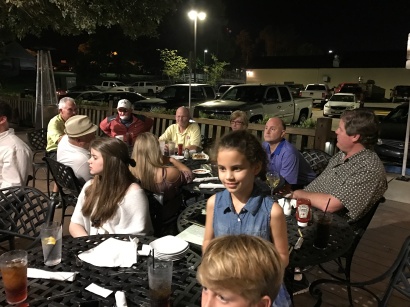 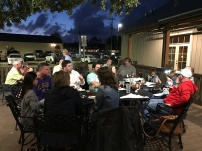 The sunrise was beautiful, especially over the golf course. The Bluff’s is an amazing place. It’s out in the country, so the surroundings are peaceful and quiet. Golfers arrived early for an 8 am shotgun start. 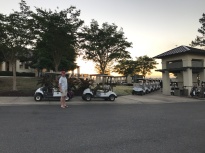 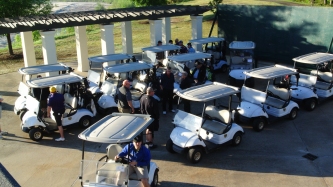 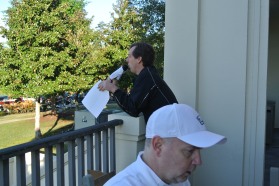 Ron led everyone in a prayer and the carts sped away to their starting holes.

Clay could have played. He was actually feeling pretty good that day, but he knew that he would rather have time to visit with everyone. Because we were the only people using the golf course, those of us not playing had a great time riding around on the golf carts and visiting all the teams. Look at our little train we had going! It was so much fun!

We stopped at every hole so I could take a pic of Clay with every team and so he could thank them for being there. It was so cool to see how many people really love him. 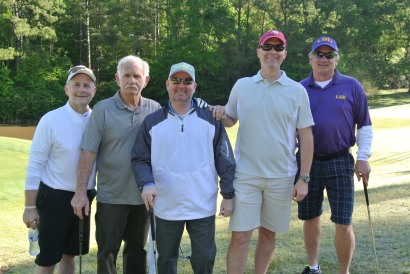 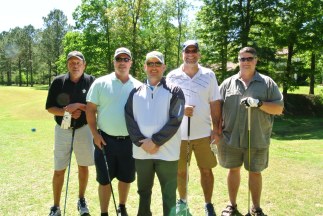 Here are some fun shots from our train ride around the course. It’s a good thing there was no Marshall riding around. We broke a few rules! Clay was fussing at us the entire time and reminding everyone to be quiet when players were lining up to swing. We tried. 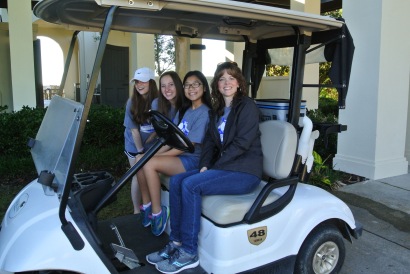 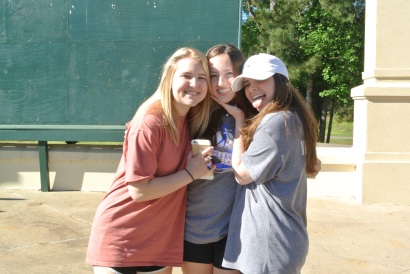 These are some of my favorite pictures of Clay visiting with the players. 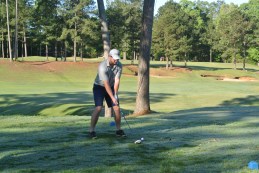 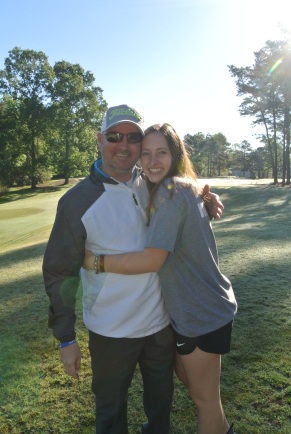 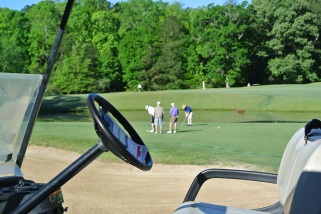 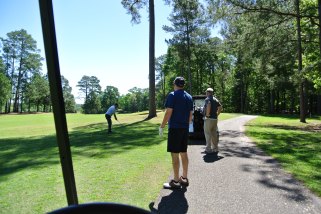 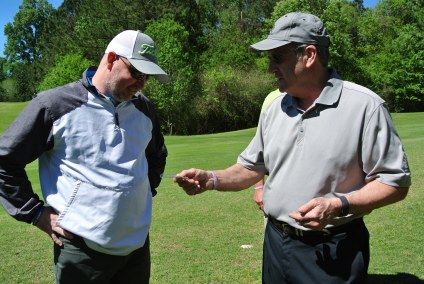 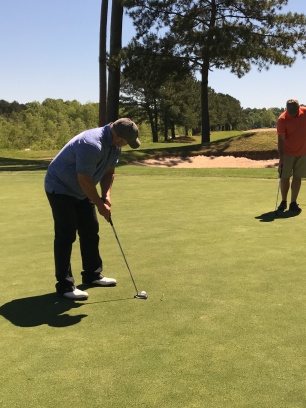 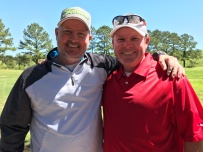 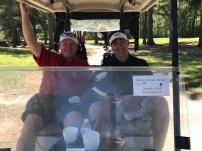 Several of my friends and wives of the players came to help in the clubhouse. We had a great time setting up the room and visiting with each other. 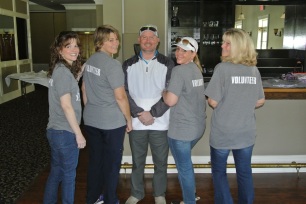 Our dear friends at Montalbano’s Seafood donated jambalaya, so when the players began arriving back at the clubhouse, the food was served. There were raffle items, a silent auction, food and drinks for everyone to enjoy. 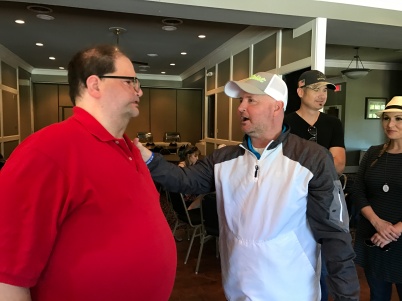 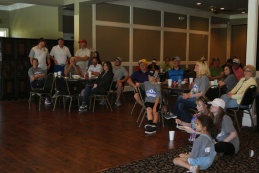 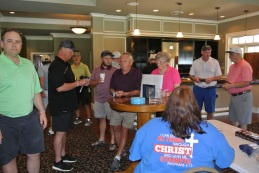 Many of Clay’s family members came to support him. 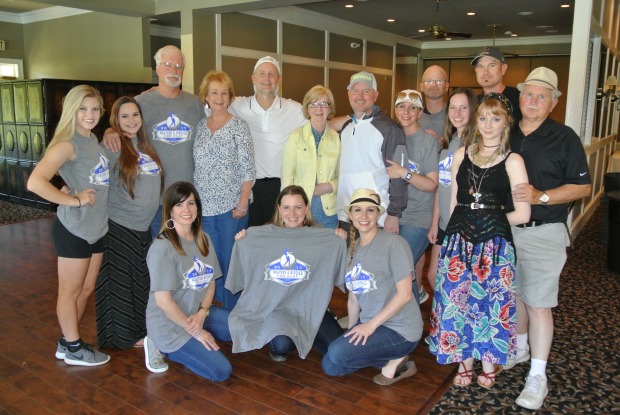 Once all the teams arrived, it was time to announce the winners. With a score of 57, Bo Capdeau, Rex Cochran, Todd Browning, and Wes Jacobs took home the winners trophies! 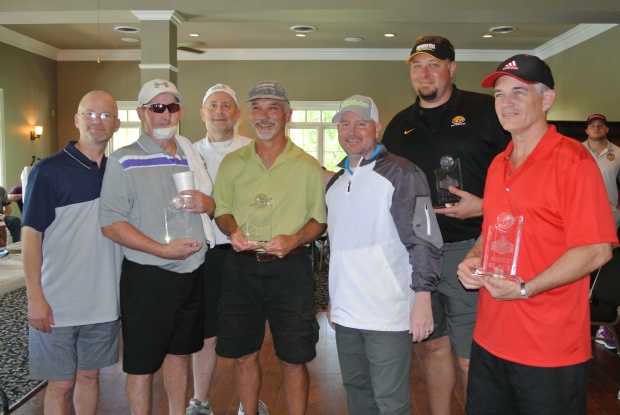 A really special moment happened when Clay’s cousins, Jennifer and Jessica, performed a song that Jennifer wrote for him. Growing up, Clay was really close to Jennifer, Jessica and Joanna. He calls them his sisters and they refer to him as their brother. They are all 3 talented musicians and singers. Jennifer tells the story in the video below, but on May 13, when Clay was in surgery, she wrote a song. The song is really just a praise song to the Lord, but she wrote it in Clay’s honor.

She and Jessica performed it live and everyone ended up signing along. Listen. It’s really, really good. She published the song on iTunes, and donated all proceeds from the sale of the song to Clay. So sweet. You can find it in iTunes – Jennifer Janet, Joy A Song for Clay.

You may want to skip to :37 where they start introducing the song. Then at 2:03 they start singing. Whatever you do, please listen at 5:53. Clay shares some thoughts with everyone there after the girls sing. You need to hear what he says.

Since Clay’s diagnosis, and I mean since the very minute that he was told about his condition, he has taken every opportunity to tell anyone who will listen that God is His Savior and he is not afraid. He always told me that he wasn’t an evangelist, but he has become one. I live with him, y’all. And, I’ve spent just about every waking minute with him since that day, and he has never wavered. Even in his sad times, even in his difficult times, even in his frustrated times. He has never wavered in his faith.

You wonder why he’s never been afraid? Because peace that passes understanding is real. Because eternal life is real. And, we can have a confident assurance of the hope of eternal life while we live here on earth. We can KNOW that we are going to heaven. You can know. All you have to do is surrender your life to Jesus. Just give your life to him. Admit that you are a sinner, that He is your Savior, and tell Him you want to live for Him.

Then, you can have the same peace…the same assurance…the same comfort….the same calm….the same love for God that you see in Clay. Even in the face of death, you can have peace. Now, that is truth. That is a testimony. People can say they love God, but when a man is walking through the valley of the shadow of death, and he can still proclaim the goodness of God – you know it is real! Clay is doing that. And it is so amazing to watch.

I believe the Lord orchestrated this day so that Clay would have an opportunity to share these words. It was very moving and powerful.

But, the icing on the cake was the money that was raised. I wish I could make you guess before you get to see the answer. Your guess wouldn’t even be close. I was completely amazed when I saw the total. The efforts of so many people, and the generous giving of many who came, resulted in a little over $9,000 of support for our medical bills!!!!!! We are still waiting on some pending charges, but I think this is going to cover what we will owe for 2017 expenses, so far. The Lord miraculously provided every dollar we had to pay out in 2016, and now He has provided for 2017.

I want to thank a few people specifically.

We had 7 Corporate Sponsors –

ITI Technical College – Joe Martin has been a friend to Clay and me for the past few years. He owns and operates ITI Technical College on Airline Highway in Baton Rouge. It is a beautiful campus and a great school.  Thank you, Joe. We love you and appreciate your support. 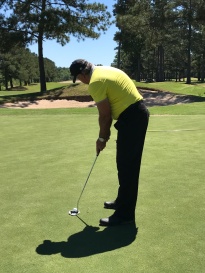 Senator Bodi White – our sweet friend, Angel Rayborn, who was Ben’s 5th Grade teacher, helped raise funds and items for the silent auction. She had a connection to Senator White and he was generous to our cause. We have never met him, but truly appreciate his giving and support for our family. Thank you, Angel!

Montalbano’s Seafood & Catering – We have been lifelong friends with the Montalbano’s. They employ two of our kids, and we eat there on a regular basis. The seafood is delicious, and the atmosphere is friendly. They cater for large parties, small gatherings, or you can enjoy the food in their restaurant on Florida Boulevard. Thank you, Randy, Darlene, Randy, Jr., and Emily. We love you so much! And, not just because you make great boudin balls….. 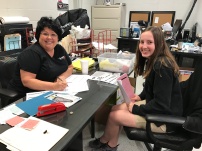 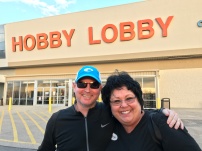 Central Cross Threads – Darci Smith has been friends with Clay since Kindergarten. I mean, really? How many of you still know someone from Kindergarten? Well, Darci has been helping us since the minute Clay got diagnosed. She made the “Pray for Clay” shirts that many of you ordered in the first few weeks of his diagnosis. She donated shirts for every player. They were the perfect give away! Thank you, Darci, for so many things you’ve done. Most of all, for just being a wonderful friend, and the supplier of everything Clay thinks he needs lately! Ha! (Inside joke.)

ProMax Marketing – Jimmy Cook is our brother-in-law. He owns ProMax Marketing here in Baton Rouge. Jimmy created the logo for the shirts. If you look closely, you will notice that the golfer in the logo is Clay! I just think this is so cool. It is an older pic of him – a pre steroids pic! Look at that form! Thank you, Jimmy. You’ve been a huge support to us and your talent really came through in this logo. 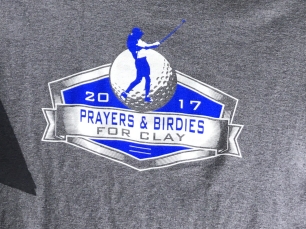 Crown Trophies – Jay Thompson grew up with Clay and Ron. He married a friend of mine from middle school, Michelle Morris, whose dad, Jeff Morris, has been very close to us during this time. Jay donated the winners trophies, plus a beautiful trophy for Clay to keep. Thank you, Jay. We wish you could have been with us, but your FIL did a great job representing you! The trophies were so nice!

There was a 7th Corporate Sponsor who donated the remaining food items and drinks. He wished to be unnamed, but I hope he reads this and understands just how much his donation meant to our family. Thank you so much for your generosity!

I also want to thank and acknowledge Tom Agazzi for his hard work. He is the Pro at The Bluff’s, and his effort made this event so nice. He was calm and in charge. He knew just what to do and how to get everyone where they needed to be. I can’t imagine a nicer place to have spent this day. Thank you, Tom! Tom’s wife, Mandi, worked for me for several years at Capital One. I love her! She came and we got to spend a little time together. Thank you, Mandi. I miss you and love you dearly.

It would be difficult to thank everyone who was involved with planning and serving at the tournament. If you came, donated, bought a raffle ticket, bought a silent auction item, helped prepare food, helped set up the room, or anything else…..THANK YOU! The day was very special to our family, and it could not have been possible without you.

I need to specifically thank Caryn Daigle who helped in so many ways. She assisted Steve and Ron in the planning, preparation of food, and so much more. Thank you, Caryn. You really made a difference!

Clay’s brother Steve Furlow was with Ron every step of the way. He kept everyone on task and did a wonderful job of making sure everything got done. We love you, Steve!

This entire event would never have happened if it wasn’t for Ron Furlow. Ron is Clay’s oldest brother (by 6 years) but everyone thinks they are twins. He had some past experience with golf tournaments, but it has been a long time since he had participated in something this big. You never would have known it. He pulled it off flawlessly. Ron, I have thanked the Lord so many times for you. It gives me tremendous peace of mind to know that our needs are met for this year, and that is mostly due to you. It was your vision, it was your hard work, and it was your heart that made this happen. Thank you is not nearly enough. We love you! 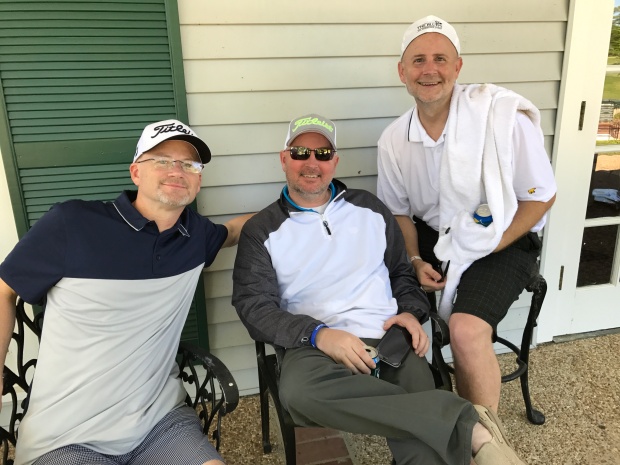 I’m sorry it took me so long to write this post and share it with you. Many of you have asked about the event. Thank you so much for your love and participation. I’ll end with this great pic of Clay with his mom and dad. They feel so loved by all of you, too.