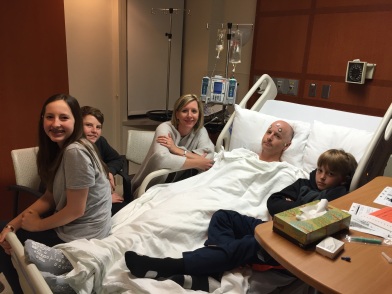 Surgery has started. We have had wonderful staff and doctors. Everyone here has been so good to us. The timing has been perfect and we have not had one problem. We only slept a few hours, but we are thankful that the surgery got scheduled so quickly, so it’s fine. We won’t hear an update until 10 am and he will be in there until, at least, 1 pm.

Clay and I had a conversation about this just a few weeks ago, well before we had any idea what was about to happen. When I read this scripture one day, I really thought about how the relationship between a husband and a wife is meant to be a picture of the relationship with Jesus and the church. The picture should be one of love and support, undying affection, total intimacy, trust, completeness, and more. I recently read in a book that some people don’t associate with this reference of Christ and the church because they have not experienced this type of love in their marriage. I was thanking Clay for loving me the way he does because it helps me understand the way Jesus loves me.

Since the minute we realized that we were made for each other, Clay has adored me. Just ask anyone that knows us very well. He gets teased a lot by his friends because he would rather be with me than do anything else. He always considers me above himself. He waits for me patiently. He is affectionate toward me, always making me feel protected. He stares at me. Seriously. We’ve been married for 17 years and the man still stares at me. We will be sitting in the same room, and I will totally be tuned out to him for several minutes. Then I’ll look up and he’ll just be staring at me with the most affectionate look on his face. He loves me. And, I promise, it is not because I am easy to love. It is because he loves the Lord and God has created this beautiful love for me inside of him. It’s because we are one person.

He told me the other day that he needed some time alone. I said, “Ok. I’ll go downstairs for a while.” He said, “No. I want you to stay.” To which I replied, “Um, you just said you wanted to be alone.” In the most sincere and matter-of-fact voice he said, “Yea, but being with you is the same as being alone. We’re the same person.” He says things like that all the time. For 17 years, he has showered me with that type of affection. I have never one single time doubted his love for me. I have never questioned if he is faithful to me. I have always known how he feels about me.

He is the same way with our kids. He plays with them. He pays attention to them. He listens to them. And, he takes time to tell them how he feels about them. They have never had to feel insecure about their father’s love for them.

As Satan has attacked the church and God’s kingdom over time, you can obviously see the things that he has attacked the hardest. One of them is the family. Marriage. The divorce rates are out of control and it is because Satan doesn’t want people to see that picture of the relationship of Jesus to the church. He doesn’t want us to be able to associate the love of Christ with something tangible. If our marriages are messed up and our husbands don’t know how to love their wives, then we have a harder time understanding how Jesus loves us. The enemy knows what he’s doing. Don’t let him win. Husbands, love our wives so they and your children can see this beautiful picture of the love of Christ.

So, as we laid in a very uncomfortable hospital bed together last night, we didn’t feel the need to pour out our hearts and say a bunch of stuff we’ve never said. We just snuggled and I thanked him for not waiting until now to let me know how he feels about me. Nothing is unsaid between us. Nothing. We didn’t have to apologize or make up or confess anything. All he has to do is look at me and I know exactly what he’s thinking. He’s spent the last 17 years showing me and telling me how he feels about me. There is nothing more to say.

I’m not telling you this to be sappy. I’m telling you this to implore you to love your family today. Husbands, love your wives. Make sure they know how much you love them. Love your children. Don’t leave words unsaid or affections unshown (I realize unshown is not a word, but it sounded better.) Take every opportunity to make sure the people in your life know exactly how you feel. Sacrifice for them. Put them ahead of yourself. Your actions speak much louder than your words. If you ever find yourself in a similar situation, I hope you can have this same feeling. I told Clay last night that he doesn’t have to say anything because I know exactly how he feels….I’ve always known.

19 thoughts on “Husbands, Love Your Wives”

In the Summer of 2018, the kids and I visited New Zealand with our friends, the Scherer’s. One of the most exciting places on our agenda was the Cavern House, which is home to the amazing glowworm. If you don’t know what a glowworm is, go look it up. I won’t have time in this […]